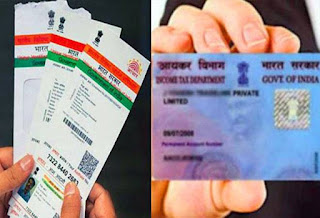 17 crore PAN cards are going to be useless: you can be included if you did not do this

17 Crore Pan cards are at risk

The deadline for linking PAN card-Aadhaar card has been extended at least eight times. Despite this, more than 17 crore PAN card holders have still not linked these two documents. Minister of State for Finance Anurag Thakur recently informed the Lok Sabha that Image credit Google
30.75 crore PANs have been linked to Aadhaar by January. However, there are still 17.58 crore people who have not yet implemented the linking guidelines.

After the amendment in the Finance Bill, 2019, the Income Tax Department can now declare inactive PAN cards which are not linked to Aadhaar. According to a report by 'Live Mint', Permanent Account Number of those who do not provide their Aadhaar number will be declared inactive by the deadline given as per Clause 41 of Section 139AA of the Income Tax Act. These amendments have come into effect from September 1, 2019.

Image credit Google
This means that if you do not have PAN Card-Aadhaar Card Linking by March 31, 2020, then your PAN will not be of any use.

The Income Tax Department has extended the deadline for linking the 10 digit PAN number and 12 digit Aadhaar from December 31, 2019 to March 31, 2020. Thakur said about this, "The extension of time for linking PAN and Aadhaar will benefit such pan holders who have not linked both these documents till now. Such people will get additional time to link PAN to Aadhaar.
In India, more than 48 crore people have a PAN card, while the number of Aadhaar card holders is more than 120 crore.
Share This:
Facebook Twitter Pinterest Linkedin Whatsapp Whatsapp
By MANUSHER BHASHA