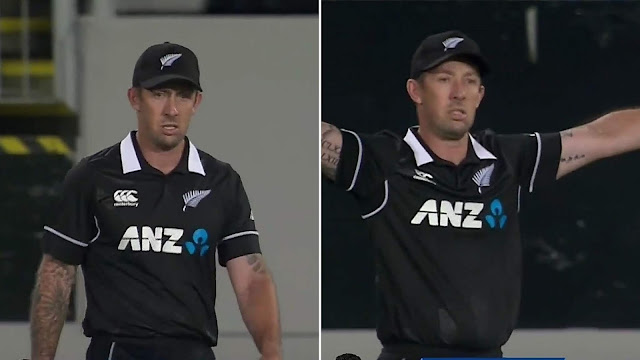 There was an interesting incident between India and New Zealand in the second match of the 3 match ODI series played at Eden Park ground here. All the spectators and players were surprised when the coach of the host team also had to come on the field for fielding. This was done due to compulsion, not due to any mistake.

In fact, the 37th over of the Indian innings had begun when former cricketer and current New Zealand fielding coach Luke Ronchi appeared on the field. He was fielding on behalf of the Kiwi team. Image credit Google
Mitchell Santner had a stomach problem at the end of the 36th over of the innings, forcing him to leave the field and replace him with Luke Ronchi. The umpires also allowed fielding Luke Ronchi. Once again he appeared on the field to fielding in place of Tim Southee. Saudis were also battling the flu.

Kiwi players have problems with fitness

This happened because many New Zealand players are struggling with fitness problems. While regular captain Kane Williamson is out due to injury, Scott Cuggegen, who played in the last match, Third party image reference
has had flu and he could not play in this match. Because of this, his fielding coach had to take the field for fielding. In the warm-up match of the World Cup 2019, the assistant of England team also landed for fielding.

Have ever seen this

However, at the international level, this would have been seen very rarely when the team's coach had to fielding.