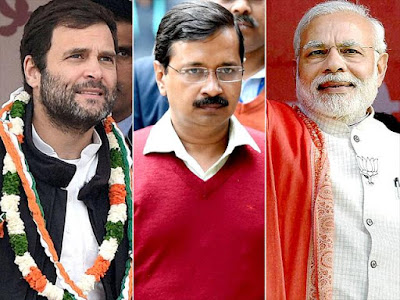 Delhi Election 2020: All Exit Polls at a glance

Though the results of the Delhi Assembly elections are to come after two days, but if we believe the trends of the exit polls, it seems that the ruling " Aam Aadmi Party" is going to return to power.
In Delhi Assembly with 70 members, 36 MLAs will be needed for a majority.

But almost all the news channels have shown the "Aam Aadmi Party" led by Chief Minister Arvind Kejriwal in a decisive edge in their exit polls.
There is a general opinion in the exit polls that both the parties playing the role of opposition in Delhi, BJP and Congress are seen slipping in the race of power.
By the way, these exit polls came after voting, but the real and real results will come only on Tuesday.

Different Exit Poll Results – A.A.P. is on the top Image credit Google
Whereas Times Now and' Ipsos' survey is giving 47 seats to 'AAP.' On the other hand, in the survey of TV 9 'Bharatvarsha 'and 'Cicero,' 'AAP' has been given 54 seats.
According to the exit poll of Republic TV and ' Jan Ki Baat' , AAP is seen getting 48 to 61 seats. Image credit Google
If the surveys of India News and the leader are true, then the "Aam Aadmi Party" is likely to get 53 to 57 seats.
Even Sudarshan News has given 41 to 45 seats to A.A.P in its survey.
The average of the trends from the exit polls or the poll of exit polls is giving 52 seats to the 'Aam Aadmi Party'.

Votes were cast on Saturday for 70 seats in the Delhi Assembly.
Although 672 candidates were trying their luck in the election field, but a triangular contest was expected between 'Aam Aadmi Party', BJP and Congress. Image credit Google
In the 2015 assembly elections, the Aam Aadmi Party won a majority with 67 seats.
This time too, AAP put full force to return to power. In the last elections, the BJP had got three seats and the Congress was empty handed.
Congress, which had been in power in Delhi for 15 consecutive years before Arvind Kejriwal, does not seem to end its exile this time too.
At the same time, BJP tried to give a tough competition in these elections and it would like to wait till Tuesday for the results.
The term of Delhi Government is going to end on 22 February.
Share This:
Facebook Twitter Pinterest Linkedin Whatsapp Whatsapp
By MANUSHER BHASHA