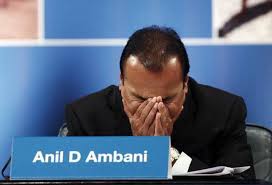 Anil Ambani, who was the sixth richest man in the world, has declared himself in front of the UK court that his 'net worth is nil' and so he is 'bankrupt' right now.

According to the news of the Times of India , three Chinese banks have taken Anil Ambani's company to the British High Court Image credit Google
to recover more than $ 700 million or more than Rs 5000 crore. This huge amount money also includes the interest of his loan. Image credit Google
China Development Bank and Export-Import Bank of China had loaned to his company Reliance Communications (RCom) which was not refunded yet. Image credit Google
This company is also in the process to be declared as a bankrupt company soon.

Banks appealed to the court to issue an order to deposit the amount of about 4,690 crore in the court to Ambani. But the judge decided that Ambani would have to deposit 100 million dollars or about 715 crore rupees in the court. Ambani's son Anmol appeared in court Image credit Google
during the proceedings on Friday. Chinese banks claim that Ambani had personally guaranteed for this loan, but Ambani claims this claim to be wrong.
Share This:
Facebook Twitter Pinterest Linkedin Whatsapp Whatsapp
By MANUSHER BHASHA