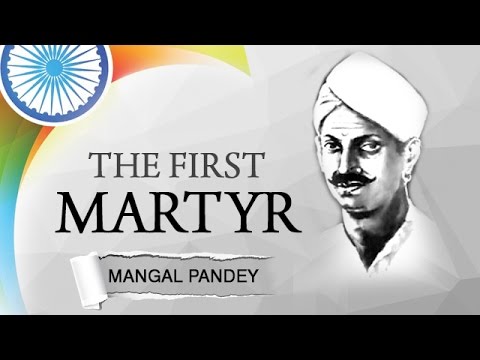 Nobody agreed to arrest and hang, Mangal Pandey gave this slogan in the war against the British

Nobody agreed to arrest and hang,

Mangal Pandey gave this slogan in the war against the British

When Mangal Pandey refused to take the cartridge

New cartridges were to be distributed among the soldiers for deployment in the Enfield P-53 rifle in the Army's Bengal unit. These were cartridges that had to be opened through the mouth before being put into the gun. Meanwhile, news spread that the fat of cow and pig has been used in the cartridges given to the soldiers. Now there were Hindus in the army as well as Muslims. For Hindus, cow is like mother. In such a situation, it was a sin for them to mouth these cartridges and Muslims could not put a pig's fat on them. These cartridges were also given to Mangal Pandey. But he refused to take them.

The British planned to disarm the regiment due to refusing to use cartridges. Meanwhile, Mangal Pandey had started knocking the British rule. He was so angry against the British Raj that he rebelled. It is said that there was also a rumor behind the revolt of 1857, in which it was said that a large number of European soldiers are coming to kill Indian soldiers.

Kim A. Wagner has written the rumor in great detail in her book 'The Great Fear of 1857 - Rumors, Conspiracy and Making of the Indian Upsizing'. Wagner writes - "There was fear in the minds of soldiers. Knowing their fear, Major General JB Hiercey called the rumors of European soldiers attacking the Indian soldiers, but it is possible that Hiercei has confirmed the rumors by reaching the soldiers and spoiled the situation. The soldiers who were terrorized by this speech of Major General were Mangal Pandey of 34th Bengal Native Infantry. "

March 29, 1857 was the same day when Mangal Pandey blew the first trumpet of the freedom struggle against the British rule. Wagner further writes- "It was 4 o'clock in the evening. Mangal Pandey was cleaning the gun in his tent. After a while he came to know about European soldiers. Mangal Pandey, who was affected by restlessness and intoxication of cannabis, was gripped by panic among the soldiers. Wearing his official jacket, hat and dhoti, Mangal Pandey ran towards the parade ground near the quarter guard building with his sword and gun. "

When the British officers tried to control Mangal Pandey, he attacked Sergeant Major Hvisan and Adjutant Lieutenant Banpade Bagh. After this, the general ordered the arrest of Mangal Pandey, but all the soldiers, except one soldier Sheikh Paltu, refused to arrest Mangal Pandey. Mangal Pandey gave the slogan 'Mare Firangi Ko'. The first slogan against the Firangi was derived from the tongue of Mangal Pandey.

When the executioners refused to hang Pandey