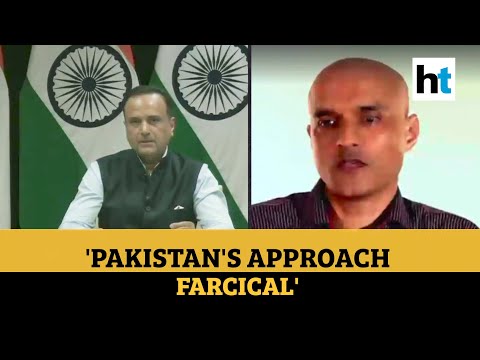 Pakistan, which has been creating problems one after the other in the Kulbhushan Jadhav case, has again been tortured and said that according to the International Court of Justice (ICJ), make arrangements to take steps and openly meet Jadhav with the officials of the Indian High Commission Make arrangements India has also said that the Government of Pakistan is constantly trying to raise doubts in Jadhav's case. He is neither taking steps nor following the ordinance of his own government as per the instructions of the ICJ. Pakistan was neither interested in implementing the ICJ directive earlier nor is taking it now.

Indian Foreign Ministry spokesman Anurag Shrivastava says that it is Pakistan's best effort that India could not take any way to provide legal help to Jadhav. Srivastava said that India has so far requested Pakistan 12 times that our officials should be met with Jadhav, but Pakistan has not been able to do so once again.

Jadhav has been made to meet Indian officials twice following the ICJ's directive, but Pakistan officials have been present there and pressure was placed on Jadhav so that he could not speak openly. The last meeting was held on 16 July, but was stopped when Indian authorities wanted to give some forms to Jadhav. This failed to gain legal representation of Jadhav.

Apart from handing over the forms related to the legal action taken on Jadhav, Pakistan was always deferred. India was told earlier that these forms could only be handed over to a Pakistan lawyer. India then hired a Pakistani lawyer for Jadhav and when he spoke to the relevant administrative officials there, it was told that he could not be given the forms related to foreign nationals.

Recently, according to an ordinance issued by the Government of Pakistan, when India tried to take the case of Jadhav to the court, Pakistan also created many obstacles there. It was told earlier that the petition has to be filed by 19 July. It was later told that it is to be filed on 20 July. In fact, according to this ordinance, convicts sentenced by the military courts of Pakistan are allowed to petition in the High Court. India wants to appeal to Jadhav according to this ordinance. However, Pakistan also took two weeks to inform India clearly about this ordinance. Srivastava finally said that Pakistan had completely failed to provide legal aid to Jadhav as per the ICJ directive.