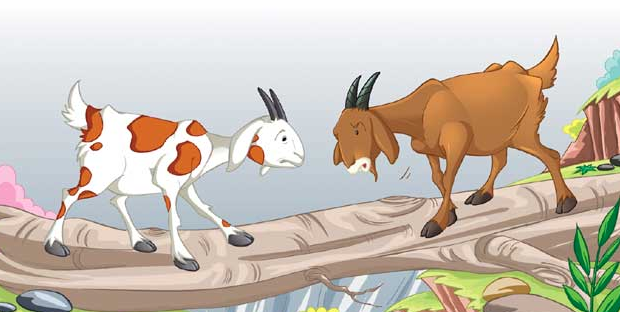 Two goats were living in a forest. They were eating grass in different parts of the forest. There was a river in the middle of the forest and a narrow bridge over it. The bridge was so narrow that only one animal could cross it at a time.

One day the two goats wanted to cross the bridge in opposite directions. At the same time, they came to the bridge and told me to leave. I want to cross the bridge recently. They were arguing saying, "Let me go first." No one was ready to back down. Their argument escalated into a brawl and the two quarreled and reached the middle of the bridge where the water flow was high. A goat said, "I will cross the bridge first. I came first. You go back." The other said why should I withdraw, you withdraw. With that, the argument between the two grew. They also did not notice that the middle of the bridge was erected and the river flow was high and the river was deep below it. As soon as the two of them started fighting, they fell into the river and were swept away by the rapid flow of the river and died.

Arguing does not solve any problem. Quarrel and Ego causes damage. We always want to find a peaceful way.