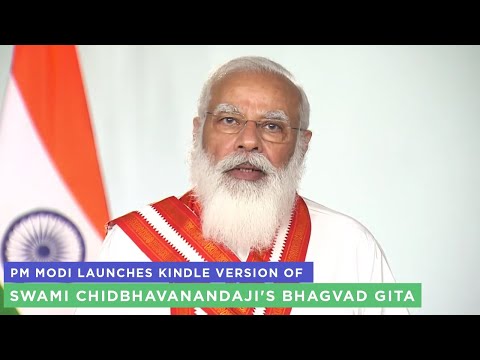 VIDEO AND DESCRIPTION CREDIT YOUTUBE -Narendra Modi
Prime Minister Shri Narendra Modi launched the Kindle version of Swami Chidbhavanandaji’s Bhagavad Gita through video conference today. Launching the e-book version of Swami Chidbhavananda Ji's Bhagvad Gita, the Prime Minister lauded the efforts to bring out e-book version as this would connect more youngsters with the noble thoughts of the Gita.Traditions and technology have merged, said the Prime Minister. He said that this e-book would also deepen the connect between the eternal Gita and the glorious Tamil culture. This e-book would enable the Tamil diaspora spread across the world to read it easily. He praised the Tamil diaspora for scaling new heights in many sectors and yet carrying the greatness of Tamil culture wherever they went. Paying homage to Swami Chidbhavananda Ji, the Prime Minister said the mind, body, heart and soul of Swami Chidbhavananda Ji was devoted to India's regeneration. He noted that Swami Vivekananda’s Madras lectures inspired Swami Chidbhavananda Ji to put the nation above everything else and serve the people. He added that on one hand Swami Chidbhavananda Ji was inspired by Swami Vivekananda and on the other hand he went on to inspire the world with his noble deeds. He praised Shri Ramakrishna Mission for their commendable work in community service, healthcare, education and carrying forward the noble work of Swami Chidbhavananda Ji. The Prime Minister said the beauty of the Gita is in its depth, diversity and flexibility. He noted that Acharya Vinoba Bhave described the Gita as a Mother who would take him in her lap if he stumbled. Great leaders like Mahatma Gandhi, Lokmanya Tilak, Mahakavi Subramania Bharathi were inspired by the Gita. He said the Gita makes us think, inspires us to question, encourages debate and keeps our mind open. He added anybody who is inspired by Gita would always be compassionate by nature and democratic in temperament. Subscribe Now: https://goo.gl/8qsb5E​ Stay Updated! 🔔 Follow us to stay updated: ► Download the NM App: http://nm4.in/dnldapp​ ► Like us on Facebook: https://facebook.com/narendramodi​ ► Follow us on Twitter: https://twitter.com/narendramodi​ ► Follow us on Instagram: http://instagram.com/narendramodi​ #BhagvadGita​ #DigitalIndia​ #SwamiChidbhavananda​ #RamakrishnaTapovanamAshram​ #Kindle​ #GitaEbook
NEWS SOURCE AND CONTENT IS FROM - YOUTUBE -NARENDRA MODI
Share This:
Facebook Twitter Pinterest Linkedin Whatsapp Whatsapp
LOUD
By MANUSHER BHASHA