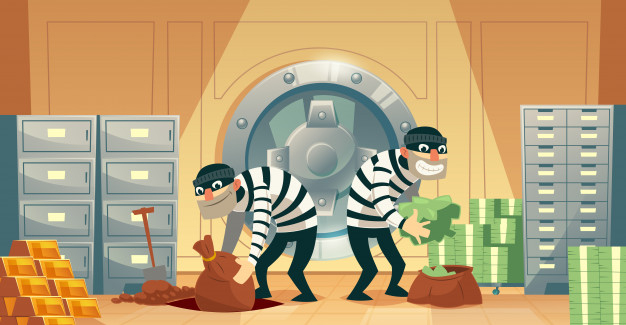 The story of two thieves, Who is a thief ?

The story of two thieves, Who is a thief ?

In America - Arthur Berry . He became known as a thief who was skilled in the art of stealing jewelry and had an extraordinary talent for stealing. His name is still number one in American criminal history, so he was a clean thief.

In the nineteen twenties people called him the Greatest Jewel Thief . In a way, he was honored with such a title. He used to target only the very rich people, and stealing was also a sign of prestige.

During his unfortunate robbery, the police fired three shots at him, and caught him! He spent the next eighteen years of his life in prison. When he was released from prison, he gave up committing crimes and stealing, and adopted a way of life that was simple, but ?? The Great Jewel Thief Arthur Berry ?? People's curiosity about him had not diminished.

People took a public interview of the changed Arthur Berry, a large crowd had gathered to listen to him, asked many questions, Arthur also answered heartily.

The interview is very colorful,

The interviewer asked the last question, 'To whom did you commit the biggest theft? Answer the truth.'

'Do you really want to hear the answer?' Arthur asked, looking at the crowd.

'Yes, yes!' There was only one glitch.

'The man I robbed the most is named, Arthur Berry, yes! I am my biggest culprit. '

Everyone was stunned and calm.

One rainy day in 1887, a customer entered a grocery store soaking wet. He bought some things, and handed the twenty-dollar note over the counter, and he walked out.

The woman at the cash counter smiled, and dropped the note in the alley, he was their regular customer, a budding painter living near the shop. Emanuel Ninger- his name!

As the note was wet, she got ink on her hand, she looked closely at the note, it was an exact note, but the ink was leaked and she suspected that it was a counterfeit note. It was a fake note, but the police were shocked to see such a fake copy.

Police raided the painter's home, confiscating his paintings. The painter Ninger went to jail. He confessed before the court that he had so far used several counterfeit notes in the market. The court ordered damages by auctioning off his paintings.

While he was in prison, his paintings were auctioned off, selling for more than 5,000 each. Millions of dollars were raised.

The irony was that Ninger, who was making a five-thousand-dollar picture, had to spend more time making a twenty-dollar note.

- Not recognizing your built-in art, everyone is a thief.

- Every person is a thief, who does not use his full potential.

- That person is a thief, who does not believe in himself.

- He is a thief in every nook and cranny, giving nothing to society and wasting his time just discussing politics for free.

- Everyone who does not love their work, does not give justice to the work is a thief.