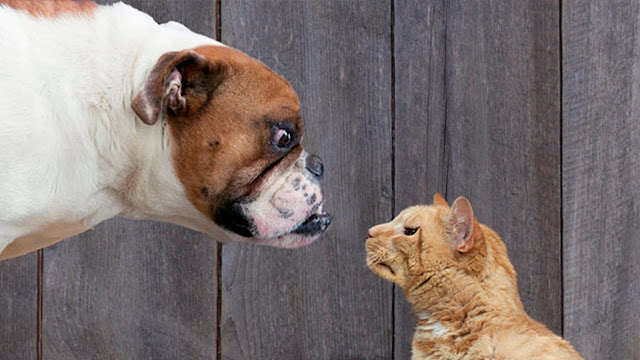 A dog who doesn't like cats? This is nothing original, and yet this dog was really not trivial.

His name was Popeye and had big ears, so long and cozy, that he used them as a down jacket to protect himself from the cold when winter came.

Like most animals of his species, Popeye disliked cats, even worse; he hated them.

He said they spend their time eating, fighting or sleeping.

Whenever he saw a cat he would get very angry and didn't give it long before packing up its hair and setting sail.

One day, in the damaged district, where Popeye lived, there was even a war between dogs and cats, which is to say if agreement and collaboration were impossible and, of course, the doggies got the better of the cats.

Since then, we must admit that life was rather peaceful in the area, and Popeye had no reason to get angry.

However, when he was resting, it was important not to tickle his ears, which he had long and sensitive.

Yet one morning, as Popeye was about to take a nap, a sweet, beautiful melody from across town reached the mutt's ears.

It was Pipouille, the scratchy cat.

He had such long claws that he used them to do a lot of things, but what he did best was playing the guitar.

His music was sweet and haunting and didn't make much noise, but Popeye had ears so large and delicate he could hear everything and never miss a beat.

"Oh, where does this beautiful music come from?" I've never heard anything so sweet, it's so peaceful, I absolutely have to find the one who plays this melody. "

So, Popeye went to meet the music lover without thinking for a single moment that it could be a cat!

But the music was coming from far, so far away that the dog began to run faster and faster, guided by the delicious sound of the guitar notes.

As he was running very fast and there was a little wind, all of a sudden Popeye had his paws no longer touching the ground.

Better yet, he began to fly through the air and his ears fluttered like airplane wings.

Popeye liked it, he felt free and soothed by this sumptuous melody.

Along the way, he encountered clouds which also heard the sound of music.

First he saw a bespectacled cloud dancing and wriggling his mounts, to a rhythm that was becoming intoxicating.

Then there was a cloud that had clothespins, and when it moved, it looked like it was playing castanets.

There was also the Cloud in the Hat, who listened to the music while sleeping.

Everything was going for the best for the animal until the moment when a gigantic thousand-year-old oak barred its way.

- Uh, sorry to bother you Mr. Millennial Oak, but I am a dog with big ears and I am trying to find out where this magnificent melody comes from.

- I'm telling you NO, answered the tree, which was getting more and more mean.

The dog didn't know what to do until he got an idea.

- I can lend you some of my ear if you want, so you will discover all the beauty of this music.

- And in return, will you let me pass?

- If your music fills me with joy, then you will pass.

Popeye, who listened a little, had never seen this, the thousand-year-old tree was so intoxicated with the music that its old bark began to shine as in the first days.

Certainly, the tree had liked and the dog could go back to his research.

What was his surprise when he realized that the one who played so well was his worst enemy: a cat!

- Because I feel that you do not like cats, and your presence disturbs me.

- Oh, but all that is in the past, I have come such a long way to meet you, your music bewitched me, now I can only love you.

From that day on, Popeye, the big-eared dog, even began to hunt dogs that disliked cats.