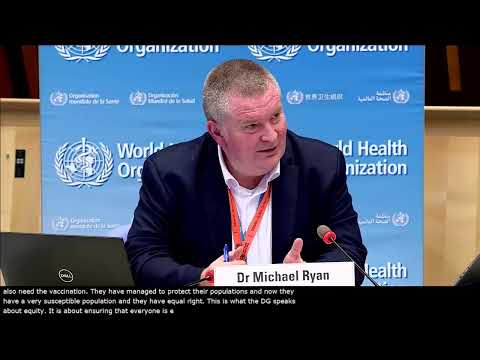 By Prabir Rai Chaudhuri (From Reuters)-

VIDEO SHOWS: WHO CHIEF TEDROS SAYING IT IS A "TWO-TRACK PANDEMIC", RICH COUNTRIES HAVE ADMINISTERED MOST OF THE VACCINES / ASKED ABOUT INVESTIGATION OF ORIGIN IN CHINA, WHO EXPERT RYAN SAYING AGENCY DOES NOT HAVE POWER TO "COMPEL" ANY COUNTRIES / ASKED ABOUT BRAZIL HOSTING COPA AMERICA, RYAN SAYING HE WOULD ADVISE ANY COUNTRY UNDERTAKING MASS GATHERING TO BE EXTREMELY CAREFUL / TEDROS SAYING SITUATION ENCOURAGING BUT STILL TOO INEQUITABLE AND CALLING ON G7 LEADERS TO SHARE DOSES BY JUNE-JULY

1. VARIOUS OF NEWS CONFERENCE IN PROGRESS

"Increasingly, we see a two-track pandemic. Many countries still face an extremely dangerous situation while some of those with the highest vaccination rates are starting to talk about ending restrictions. In countries with the greatest access to vaccines, we are seeing a decline in mortality among older age groups. In these countries, the public health and social measures that have help to protect people are being eased but they must be eased cautiously."

"We will continue to work with all parties, especially in the case of COVID's origins. It is very, very important that the world understands what the origin of SARS-COV-2 was. It is important for now, that's important for the future in terms of preventing further pandemics. It is not always easy to determine that, for many, many other diseases, it has taken years of study in order to be able to even understand the basics of that. So, it is not an easy task and we will continue in the second phase to propose the necessary studies to take our understanding and knowledge to the next level. We fully expect the cooperation and input and support of all of our member states in that endeavour."

"Globally, we continue to see encouraging signs in the trajectory of the pandemic. The number of new cases of COVID-19 reported to WHO has now declined for six weeks in a row and deaths have declined for five weeks. However, we still see a mixed picture around the world. The number of deaths reported last week increased in three out of WHO six regions, Africa, the Americas and the Western Pacific."

"Increasingly, we see a two-track pandemic," Tedros told reporters during a press conference from Geneva.

Pressed by a reporter on how the WHO will "compel" China into being more open, Mike Ryan, director of the agency's emergencies programme said that the WHO cannot compel any country to divulge more data on COVID-19's origins, while adding it will propose studies needed to take understanding of where the virus emerged to the "next level".

"WHO doesn't have the power to compel anyone in this regard", he said.

"We fully expect cooperation, input and support of all of our member states in that endeavour," Ryan added.

There are competing theories: that the virus jumped from animals, possibly starting with bats, to humans, or that it escaped from a laboratory in Wuhan, China. Members of a WHO team that visited China earlier this year hunting for COVID-19's origins have said they did not have access to all data, fuelling continued debate over the country's transparency.

When asked about Brazil hosting the Copa America soccer tournament, Ryan said he would advise any country undertaking mass gathering be extremely careful to manage risks.

Argentina pulled out of hosting the tournament - due to run from June 13 to July 10 - as the pandemic there worsened, and Brazil stepped in as possible host, over objections from some officials investigating the nation's pandemic response.

As leaders of the Group of Seven rich nations, G7 meet this week in the UK to discuss major crises, Tedros called on leaders to commit to share doses by June and July.