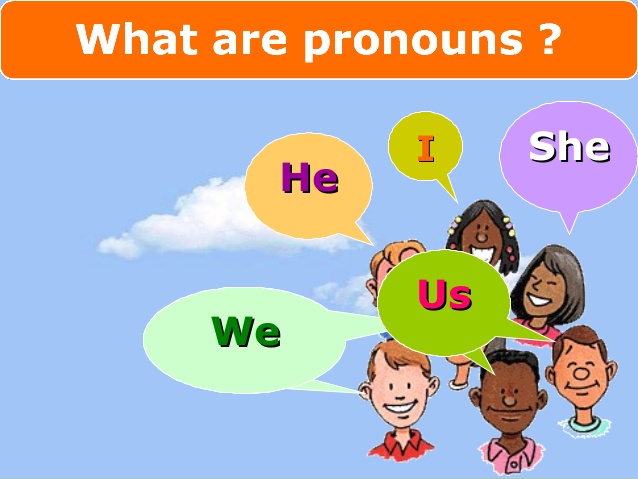 Do you know all the pronouns in English?
It's a bit more complicated than it seems to be  ...

Here's a little Chart on the various types of pronouns in English. 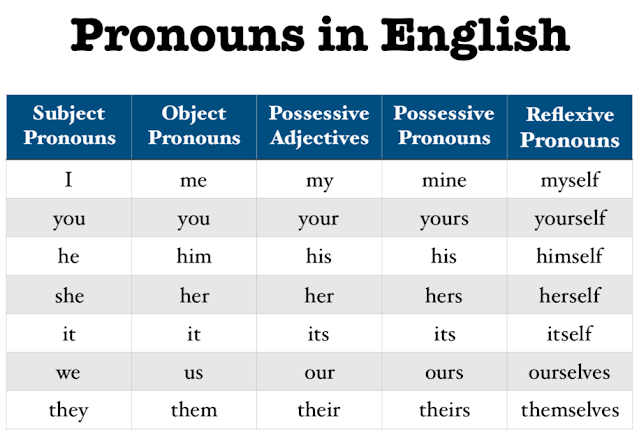 Types of pronouns in English and how to use them

English has several types of pronouns that are used for specific functions.

First, what is a pronoun?

A pronoun is a grammar word that can be used to represent a noun without using the proper or specific name of the thing.

So instead of saying John, we say he .

Instead of saying Sarah, we say she.

Instead of "the tomato" we say it .

And instead of saying Tom and Mary, we say they.

Sure, you can also talk about Tom, Mary and the tomato if you want. But pronouns are used a lot, especially to avoid repetition.

Q: Where is the tomato?

Q: Where is Mary?

We already know that we are talking about Mary, so there is no need to repeat her name.

So far so good.

Now we will talk about the various types of pronouns in English, and how to use them well.

Subject pronouns are used to talk about the subject of the sentence (the part that develops the action).

it = to talk about objects, animals, gender-less things

they = them / them (also used to talk about gender-less things)

And here are some examples of sentences that use subject pronouns ...

I ate the sandwich.

She went to work.

We're waiting for the bus.

We are not always talking about physical actions, but about states, possession, etc. And remember, as we have seen in the examples, that sometimes the pronoun is combined with a short form of a verb: I'm, you're, we've, the'll, etc.

I 've got two sisters.

We continue with the next group, which are the object pronouns ...

The object pronouns are ...

it = is used for things, animals etc.

Here are some examples of how object pronouns are used in sentences. Notice that the pronoun is used to represent the person (or thing) that receives the action of the verb ...

Give me the money.

I'll send the pictures to you tomorrow.

I called him an hour ago.

I looked for her at the concert.

Put it in the fridge.

If you need any help, just ask us .

Mary took them out to dinner.

As you may have noticed, two of the object pronouns are the same as the subject pronouns: you and also it . We know the usage by the position in the sentence and its relation to the verb.

Possessive adjectives are not (to my knowledge) a type of pronoun, but they are usually taught together with pronouns because they are similar.

They are used like other adjectives  - to describe a noun. But they only describe one aspect of the noun: Who does it belong to?

If you want to learn pronunciation, watch the video. Examples below ...

There in the video, the most difficult thing for many is usually the pronunciation of her , which is different from the word for hair .

its =  of something without gender

In English we have different words, and you have to use them well.

Here are some examples of phrases ...

You dropped your keys. (Dropped = dropped)

I have washed his hair.

We sold our house last year.

The children took off their shoes.

Please don't say things like “My brother and her boss” - the word brother is clearly masculine, and that is how “his boss” would be.

We have more types of pronouns in English, which we will see here next ...

They are used, then, when you already know what you are talking about. In your mother tongue , the equivalents are it's mine, it's yours, it's hers, etc.

its own = (yours, from a gender-less thing, but not used much)

theirs = their (of them)

This towel is yours . (It's your towel.)

The cat has a personality of its own .

The money is ours . We earned it.

We ate our lunches, and they ate theirs .

We continue with another type of pronouns in English, the reflexive pronouns.

Reflexive pronouns are used when the subject and the complement of the sentence are the same. They end with -self (singular) and -selves (plural).

itself = oneself (something without gender)

theirselves = themselves (they, they)

Here are some examples of phrases with reflexive pronouns in English ...

I cut myself while I was cooking.

He looked at himself in the mirror.

She hurt herself when she was skiing.

The turtle was on its back, trying to turn itself over.

We bought ourselves a new car. Wanna see it?

They locked themselves up in the bedroom and didn't come out for more than an hour.

We have seen some examples in the section - with clothes and body parts, the reflexive is not used but the possessive adjective: my hair, his eyes, her legs, our teeth, their shoes.

We also use an expression with by + a reflexive pronoun to say that someone does something alone , without anyone else.

He lives by himself in a small flat.

She usually has lunch by herself .

You don't need to help. We can do it by ourselves.

The kids put on their shoes all by themselves . I can't believe how much they're growing up!

And finally, we have a few more words that are also pronouns ...

Other types of pronouns in English

There are other types of pronouns in English that you should mention before finishing.

First, the demonstrative pronouns: this , these , that and those .

What do you think about this film?

Those girls are really pretty!

And we also have reciprocal pronouns, which talk about things that people do to themselves in pairs or groups. There are only two: each other  (for two people) and one another (for more than two people).

Tom and Mary love each other very much.

The children were in the garden, spraying one another with water.

The thing about two people and more than two there is what the official grammars say, in any case - nowadays it seems to me that we use each other more without thinking much about the number of people.

And that's it .. Follow MANUSHER BHASHA for next lesson ..